MY LIFE in 36 Pounds…….how not getting caught up in Columbia House allowed me to go to Colombia.

The first time I was ever given proper credit was sometime in the 80’s at the exact moment I received my eight carefully selected tapes from Columbia music company. Six to eight weeks previously I was tearing apart postage stamp representations of music albums, licking them on to a selection sheet, and getting involved in the wonderful interdependent worlds of consumption and consumerism.  After hand writing the application (re: name and address), and the envelope, I walked off to the mail and sent in my very first credit application. Beuf! 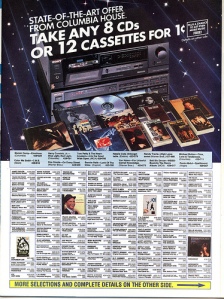 Wetting the appetite of the young consumer this credit purchasing trend did not cease with the advent of the CD, although Colombia Music House succumbed, but rather increased and manifested its self into every aspect of our everyday lives. When I started college there were very few people holding their own credit cards, but by the time I walked down the aisle for graduation, you couldn’t get through the school year without being approached by dozens of credit card companies vying to sign you up.  If the free mug or “something U” tshirt or flannel uni pants didnt entice you to sign up as you walked the hallways of higher education, then maybe the allure of having a photo of your alma matter on that little piece of plastic – with a little visa or mastercard logo in the corner – would…..or eventually did.

With credit being king, suddenly a lack of fluid cash did not cease our purchasing power.  In fact, credit increased our ability to buy goods and we did so at an ever increasing rate.  We were inundated with phrases like “don’t pay a cent”, “do not pay till the year 2005”, and “no money down” until they became context of this new popular culture.  As a group we were dealt a wonderful hand of increased tuition and cost of living, lower wages, higher unemployment, and larger debt load.  This didn’t phase us however as we had access to credit, and companies were offering this credit to us at an alarming rate and with increasing frequency.  We bit and we bought.  And we bought and we bought.

We don’t need to look much further than our own debt loads and credit problems to know the rest of the story.  More and more people are struggling to make even minimum payments and the interest rates are astronomical.

A recent FB status photo update from a friend who captioned this:  “credit cards are getting a work out today!”

Taking solace in the vast amounts of goods contained in our homes, garages, closets, and basements and finally making their way to the land fill – the debt continues its stranglehold.  Strangely enough, a frequently used “feel good” remedy is the purchase of an Iphone, even throwing out the old one and lining up for an hour for the opportunity to spend $500 on a new one (re: more credit, and signing up for a 3 year contract)  because then the phone is free right?.  Smart isn’t it?  Not really……but it feels good in that moment, so I’m told, or so it appears.

And there it is, we have stuff and we have debt and we live with it.  Some people are even comfortable with it, wouldn’t know what to do without it, the new normal. Gather those airmiles, but never take flight.  For me conversely it’s the flight I’m looking for, and for what I like to take.

I am able to do this because I don’t have debt (re:things) that create the debt and thus keep one grounded in one spot for a long long time.  This new world normalcy for many, is for myself, so foreign.  Debt controls us, strangles us, and holds us like a bear hug we want to get out of but in some sense we like – and are used to, not like we have any other choice.

When packing for my recent 3 month trip to Colombia I took all of what I needed, but what some might call the bare essentials.  My entire life for 90 days on the road was folded up into a backpack that weighed 36 pounds at the airport check in.  That is all.  My entire living existence was contained in one bag slung on my back and really, this is all I needed.

Although I was introduced to consumerism, credit and consumption by Columbia Music House some twenty five years ago, I did not get caught up in this culture as most did.  For some reason (maybe years of living day to day during and after university with a strict accounting dad holding the reins), I paid off my debt and never returned.  I clearly remember the day I became 100% debt free, it was the first time I actually felt free…..and it was a great feeling .  A better feeling than I received from anything Ive ever bought.  Suddenly I was empowered and able to make choices in life based on what I wanted to do not what I had to do.  Happiness and mobility increased, working hand in hand like a secret formula we were never taught or shown.  I continue to challenge myself to work with what Ive got and not extend myself beyond my means.  Its fairly easy when travelling in second and third world countries but understandably harder whenever I return home for more than a week or two.  With that said, each time I purchase a plane ticket Im reminded why I don’t want an Iphone or new living room set or the latest kicks, and why I just laugh at people who’s local grocery store is Costco (re: you never leave there without spending a couple hundred bucks).

Not getting caught up in Columbia Music House, has allowed me the opportunity to travel COLOMBIA!

For the interested, here is a complete list of what thirty six pounds of goods in a backpack adds up to:

Things I didn’t use, or were lost or stolen on trip:

-2 button down t-shirts (not used)

Foot Note: An interesting article about how Colombia House was able to make money through their sales scheme in the 80’s and 90’s

This entry was posted on May 4, 2013 by andrewmorden. It was filed under bio, Travel Incidents Replayed and was tagged with Colombia, Columbia Music House, Consumerism, Consumption, Credit, Credit Cards, Debt.