Stories from Thailand. The Introduction.

Thailand became a big part of my life quickly and exactly at the moment when the intent was set for my first trip there. That was 2004, and four weeks of my life.  I returned the following year for an anniversary, but not one of the happy sort. A couple of years later I went back once again – in the mean time –  planning all the while for a time away in Central America, the following year.

These trips through South East Asia have remained some of my more formidable travel experiences having  shaped my future travel preferences,  intentions, actions, satisfaction and choices. Putting a backpack on and without any pre arranged/pre paid plans (see: showing up with no where booked to stay), Thailand has provided me some of my first interactions abroad, and within a culture that has been hosting travellers for decades.  As crazy as Thailand was, and it is………..it remains a great place for the first (or second or third) jump off for an extended vacation – travel.  Bangkok is the gateway to more than the east…..it is the beginning and ending of different peoples journey from far across, and from all points on the globe. People colourful, traffic and confusion plenty, order and extravagance personified, detailed and yet spontaneous……this is Thailand.

When people ask the obvious (see: any question about Thailand)……..I always respond:

“You don’t have to die to go to heaven, just go to Thailand.”

Gets them every time……but its true.

More than a few stories have come about during my travels to Thailand…….what I always experienced was even more than simply ups and downs.  I mean, the route less travelled is not supposed to be easy and that is the point…………however, when you first start this whole travel thing this  is the point, and a valuable lesson.  Many trips later, you can actually make it easier and better for yourself  (all the while being able to extend your person further and more forcefully, in a positive way)………..and that is the culmination of comfort , experience, people, and place………..this – for me – started  in Thailand.

I’m going to share some of my experiences travelling through Thailand – stories that interact entirely – even though I might not be able to make the obvious connection to you right away.  They will jump around a bit, and Im going to have to leave out adjoining details as so Im not writing a novel, but for all intents and purposes…..these are going to be true and transparent, funny and ironic, sad and spiritual.  If for anything else, the stories deserve the medium.

Im going to submit a new post once a week for reading pleasure.  Below is a great little overview video of Thailand.  It is not something Ive put together but the video does a great job introducing the highlights of the country in just over 3 minutes. Enjoy!

Ps. I know many people have been to Thailand over the years.  If you have an interesting story to tell (and you put it on paper), I am looked for outside content for these pages.  Just get in touch!

I was travelling through Thailand on my third trip there in as many years.  Yes, I fell in love with the place, the people, the food, the everything about it.  This was also was the first time and place I had ever backpacked.  So like a high school crush, or actual first love, I couldn’t let Thailand go for a few years.  Now I look back on the place with fond memories but with no intention of reliving high school (so to speak) at this point in my life.

My girlfriend at the time – and I – made our way over 6 weeks through the south, the north, into Laos and then finally back to Bangkok – for our last night in town.  Specifically, Khao San Road. KSR is the beginning and ending of anyones journey to south east asia.  Everyone there is either coming or going but no one is staying any longer than they have to.  If you’ve never been to KSR, you must go….it is something out of this world and has to be experienced in order to understand.  Alas though, not the point of this story. 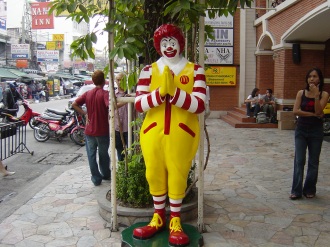 With all the culinary delights and choices of exotic and fun, somehow the moment seemed right for us to eat at McDonalds in what would be our last meal in Thailand – on what would then be – our last night ever in Thailand.  Things were working well off the start.  Familiar, air conditioned, clean, and a menu in English.  Maybe the menu wasn’t in English because pictures certainly are a universal language.  I imagine I was just pointing at a picture and saying a number. Nung, song, sam, sip, 1, 2, 3, 4….or something along those lines, which was all I needed apparently.

Everything to this point was spot on for McDonalds as weve (re: North American collective) come to expect, and we sat down inside the restaurant to eat familiar food in familiar surroundings.  I started with the fries (add more salt always) and a sip of coke, check. Moving on to the burger,  I opened up the wrapper and saw a glorious specimen of a Big Mac.  Finite details of lettuce and sauce and buns and floating.  Yes the whole sandwich appeared to be hovering layer on top of layer….. fluffy like.  In other words, fresh and put together with inspiration that would be similar to that as making a house of cards…..detailed, delicate, and tall.

There was a lunch hour line up starting to form and we realized that our selection of serenity seating –or a nice quiet meal – was basically parallel to the people waiting in line  to give their order.  We had started, so we sat tight and kept our talking low – in other words, listening to other peoples conversations around us.  Looking into the meal, I carefully picked up the sandwich making sure the layers were not sliding off one another – and  by this, making two indistinguishable menu items.  With strategic placement of my pinky fingers around the master piece I was off for the first bite of my last meal in Thailand. Bite one tasted ok (a bit more sauce I thought) and I was chewing away actually thinking that this was decent. Second bite was roughly the same thing but I noticed that the sandwich was starting to move each level around and getting a bit out of control.  Chewing and not thinking, I continued on. It was the third bite that was the disaster. Something unexpected here.  The wonderfully constructed weightless and fluffy burger took on a life of its own.  Probably the sauce factor, slippery pickles, greasy patties – and my lack of attention from bites one and two – and suddenly the burger exploded. One bun this way, one patty that way, a pickle flying off to the side, lettuce flying like shrapnel, sauce dripping like dough from a spoon – gooey but quick.

The overwhelming thought when my girlfriend pointed out I was a disaster – or looked like one rather – was that, in fact I was.  Mess everywhere, literally.  Its amazing how fast that can actually happen.  One minute, sitting down and diving in, and the next, a make your own big mac platter sitting in front of you.

Standing next to us in line were two British girls, one looking at me with shock

“oh my god, I think Im going to be sick.” She says to her friend as they peer on my sorry soul.

“Girls……Save yourselves.” I announce.  “This was the worst choice ever…..I cant freaking believe……..”  My girl kind of nods her head in support…….going with it….

I got up and threw the entire tray in the garbage. The two British girls left the restaurant.

And, I was pissed (for the food that is, and my choice to be there).  I realized at the moment that I was sitting in McDonalds on my last night in a place that can easily offer the best food reputation, as a purposeful reason for going there. Cheap and abundant…..for years enjoying fresh fish on the sea, padi thai in the market, and well, tons of stuff….mango salad, theres a mention as well.

“This is the worst thing ever, this is freaking disguisting.” I mention, getting up to leave and to clean up as well.

So we did.  Up and left.  Meals gone in the bin, 2 additional customers lost (plus the British quitters), and a sour Thailand taste to boot.

With these events, headed back to the room…..or maybe the pub – it’s the last night Irish one for those who have been there – one or the other we were gone. Quickly I was absorbed in the last hours fiasco and true to form couldn’t let it go.  I was mad…not gone mad, but well, spouting off.

Announcing “that was the last time I eat McDonalds ever!” and so it was….

I haven’t eaten one iota of McDees for 6 yrs. Until Luxor Egypt last November and it saved my soul.