A brief pictography on Colombia, complete with a little commentary.  Individually the images illustrate life in Colombia.  Collectively – and in comparison – they tell quite an interesting, if not funny story.  Read it all and scroll slowly. Enjoy. 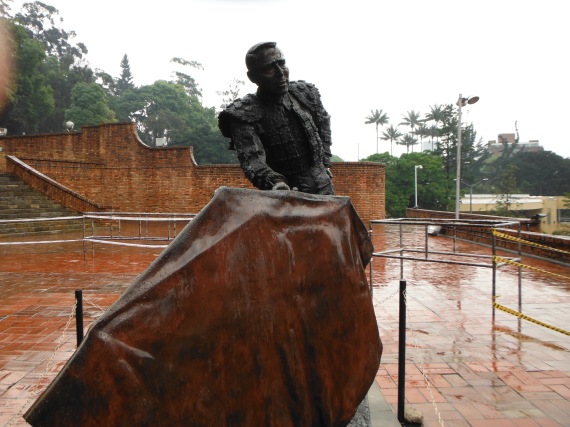 One of the best fighters in history.  Not sure who he is though, looks tough.

This is the grand city bull fighting ring in downtown Bogota. Quite a structure and quite the tradition.

The bullring was closed by ‘Prime Ministers’ orders in 2012 and re opened as an outdoor skating rink. 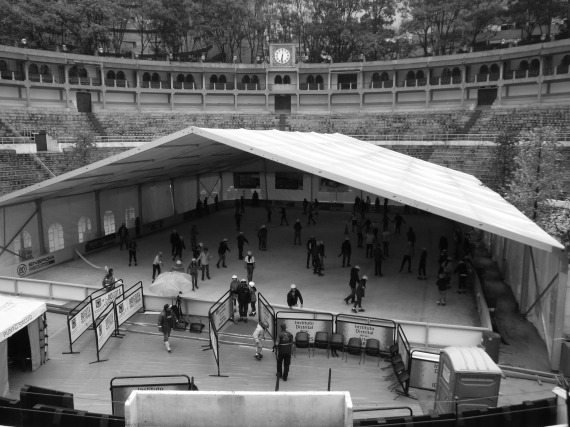 And yes this is actual ice. Paid admission, noggin holders and padding, incl. 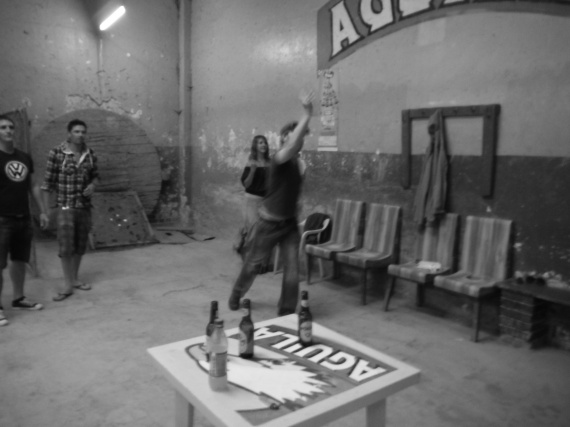 It looks like a simple game of throwing something for points.

Tejo (pronounced Te-ho) is a National game in Colombia.  It is not found everywhere, but when you find it, its pretty cool.  The three times I was actually able to find an arena and we went, the game cost the same to play.  In all threes instances ‘senor bartender’ approached the group and we discussed playing and what was involved.  The “ante in”, I have to refer to it as, was 15 beers.  Yes, one-five.  Brought to us in a case along with the discs to throw….and a little bit of instruction…..not much. This is yours truly, three Brits looking on. Good people. 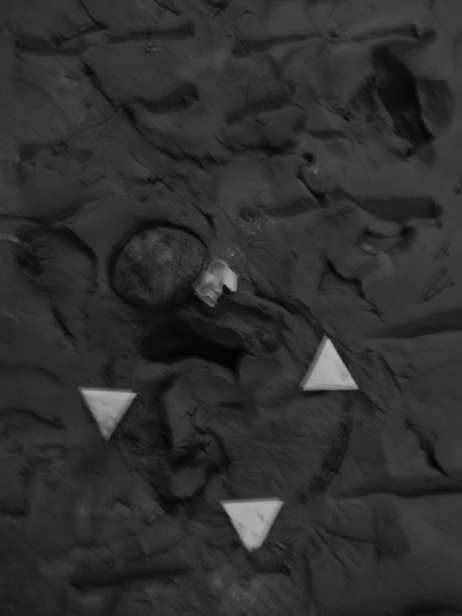 The goal is to land the disc on one of the triangles which are sitting perched on the edges of an iron ring…..look close.  This throw was close to the target.

If you are really lucky (or skilled enough) to hit one of the triangles dead on, there is a wonderful little reaction. really skilled players can do this two or three times in a row…..for us, it was a matter of pride to at least hit one, once.  We did…….I did, at least 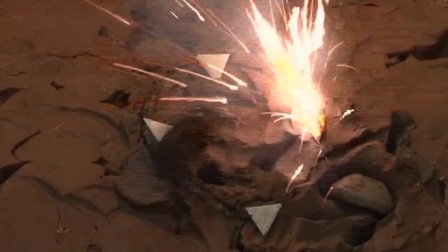 The triangles are filled with a bit of gun powder. Everything striking together at the same time makes the ka-boom. And man it feels good. Fun Times.

And for the record – Beer selection: Poker, Aguilla, Club Colombia. Mix them up if you want, but you buy 15 – none the less – in order to be able to play for as long as it takes you to drink the suds. Senor bartender and instructor on the right of the pic. Nice stash. 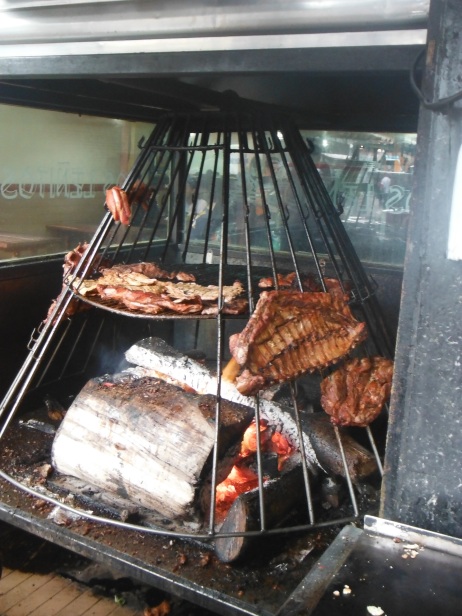 Downtown Bogota features a couple of these BBQ restaurants with this impressive vertical style grill cooking up various meats.  You can get an assorted plate of chow for around $12/pp.  The grill masters working street side entice people passing through by offering a sample of something savoury handed to you on the end of a prong……..seems pretty good. 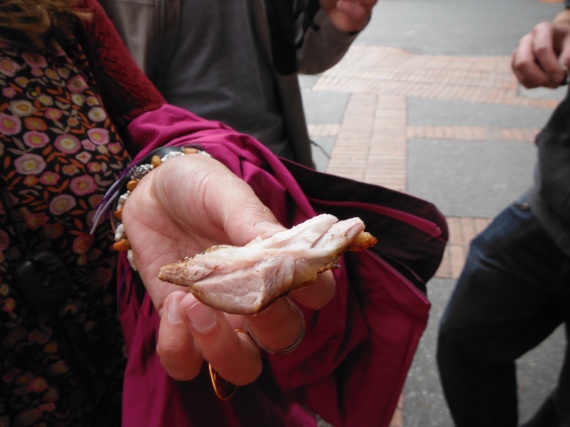 A tasty looking sample. It actually works getting you into the restaurant of course.

Between chews it is quite likely that you would ask what exactly you are eating.  Beef? Chicken? Pork?  Carne? Pollo? Cerdo?  After a resounding ‘NO’ to these three likely choices, the employee then hands over a little sign depicting the animal who’s meat just went from the grill to your hand then your mouth.  What is it exactly? 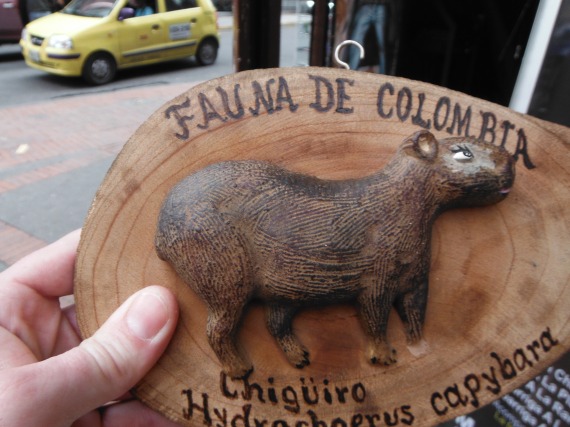 The Chiguiro is in fact the largest rodent on the planet  and is found and sometimes eaten throughout South America.  Its bigger than a beaver, reproduces like a rabbit, hangs out in packs like a wolf, eats like a rat, barks like a dog, and is as big of a pain in the ass for residents and homeowners as racoons are to us here in Canada. There is some interesting information about the animal on Wikipedia.  Click here for Chiguiro facts and figures on Wikipedia.

The best line on Wikipedia about the Chiguiro is below:

As always and with anything: Buyer beware.

A LITTLE BIT OF CULTURE

The Colombian National Museum in Bogota is an impressive building that was originally (and previously) used as a prison.  It has some impressive spaces and works to look at.  Certainly (as in everything in Colombia), there are some interesting and opposing works and exhibits. 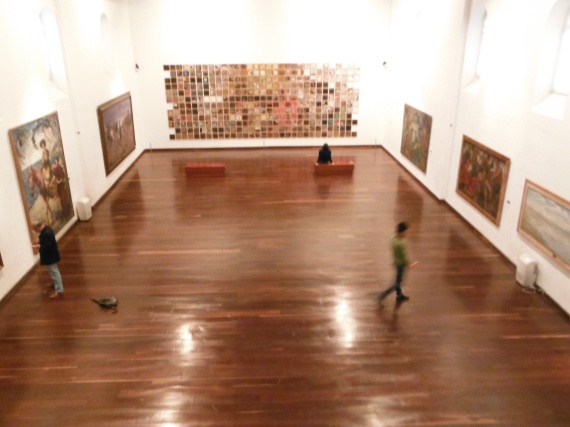 A gorgeous and spacious room to look at the works.

There are many examples from one of the most celebrated Colombian artists known as Fernando Botero.  He is known for creating bloated, oversized depictions of people, animals and elements of the natural world.  Certainly he is prominently featured in this museum.  Lots of big bums and rounded people. 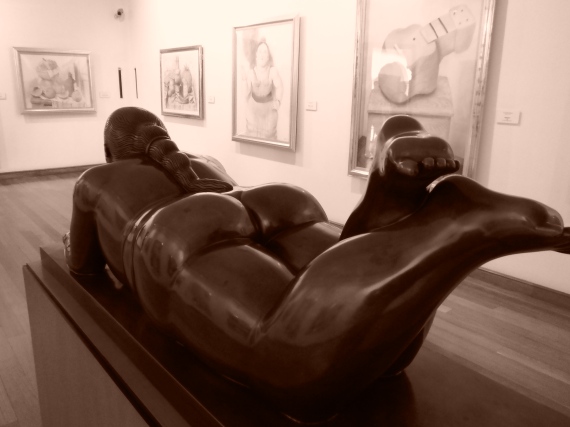 Before cosmetic surgery in Medellin become so popular including the ‘butt implants’, Botero led the way in sculpture.

A little bio on Fernando Botero.

Back to the prison feel and open spaces…oh if these walls could talk. 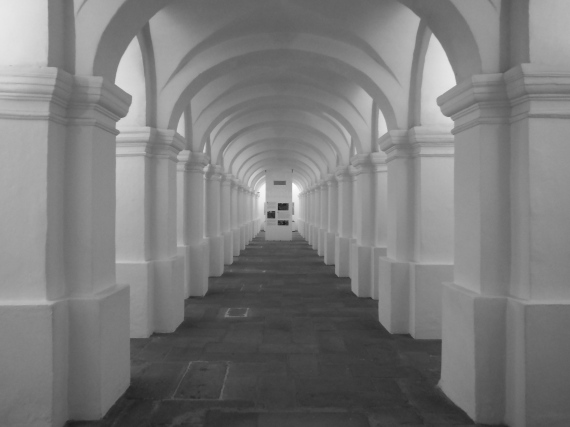 And finally the ‘piece de resistance’, a piece of a meteor that struck and landed in Vichada, Colombia.  Somehow doesn’t see to fit in the museum filled with art. 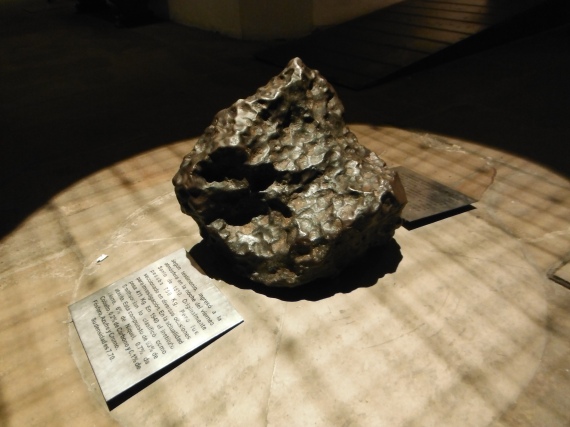 Nor does the headless statue. 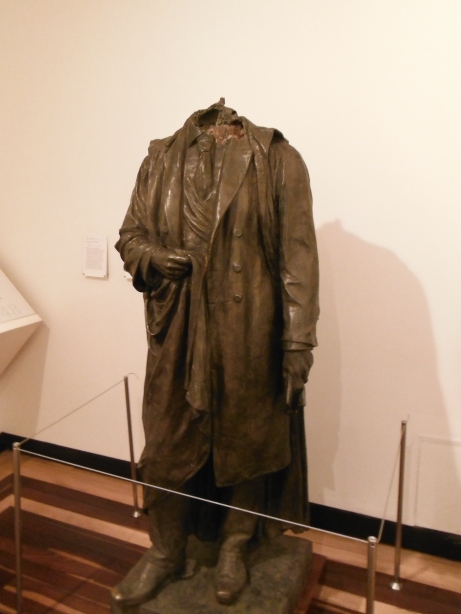 List of famous people over history who were beheaded.

Travelling is not at all travel without meeting a whole bunch of other travellers from all walks of life and from all over the world. This particular guys name is Russell.  I met Russell during my first week in Colombia.  Like me, he arrived with very little plans for his adventure.  Unlike me, he was travelling on a very very tight budget, was busking at nights to make ends meet and our differences dawned upon me when he stated he arrived in Bogota with only $100 in his pocket.  To further differentiate between us, Russell was going to depart Bogota in a few days, and do so on foot.  I was in shock to be honest……walk out of Bogota?  No fares for buses or taxis or anything of the sort…..just simply walk.  Out of monetary necessity and pure enjoyment Russell went about his journey, one step at a time.  To be honest, I thought the idea was a bit crazy. 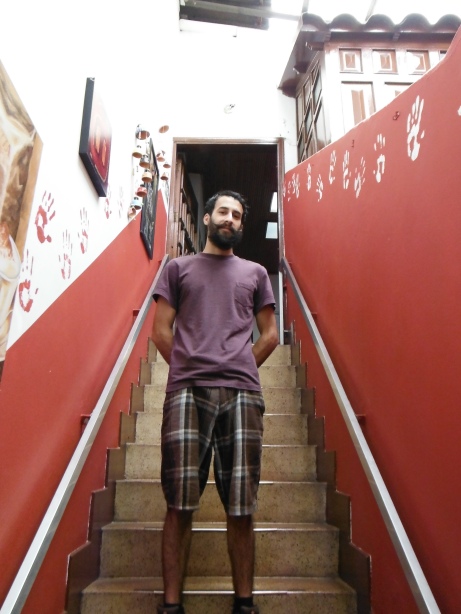 And to prove the point, we came upon Russell on his way out of town.  Hes not hitching a ride but was waiting for a western union money transfer to arrive of $100usd and then he would be on his way.  Once again it dawned on me……who would think of just leaving city and heading out (route unknown) with only $100 in their pocket?  Money that Russell told me he would use on provisions.  Say the words provisions, walking and Bogota in the same sentence and you are either the craziest or coolest guy in town.  Russell was a pretty cool dude. age:26. hometown: Pheonix, AZ. Profession: Artist/Musician. Full name: Russell A. Barnes, look him up. 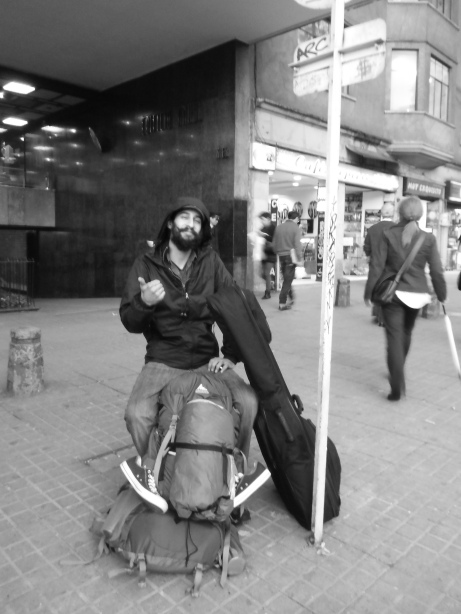 While staying at Los Pinos Hostal, high in the Sierra Nevada mountains on the north coast of Colombia, we had a visitor come by looking well worse for the wear.  The visitor was the dog you see below and this picture is of him when he arrived.  Barely able to put one foot in front of the other, the stray was certainly on his well worn out death bed…..he’s probably been there for a while.  After a few hrs of him scared and timid and looking like he needed something to eat at least, I recalled a similar dog we had in Utila Honduras that (due to the physical nature of him), we called ‘Bones’. And this dog was now another ‘Bones’. 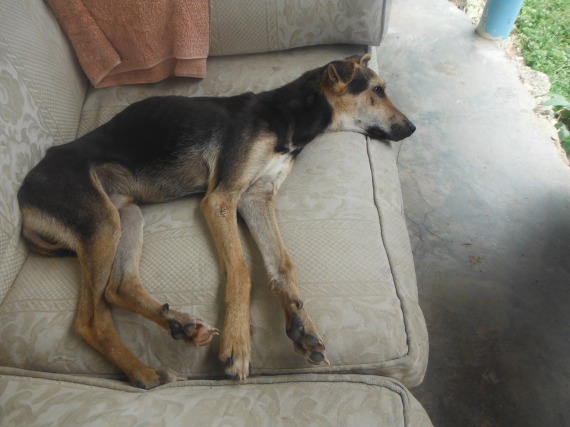 Bones must have made quite the impression on his first night…….everyone was horrified by Bones at first but for different reasons.  Some were horrified by his skidish nature, and protruding frame, wanting the dog to just ‘go away’…..others were horrified about the lack of strength and health of the dog and were very compassionate for him, wanting just ‘to feed him and get rid of his ticks’.  I was neither here nor there on the particular topic until the following morning, although I did name him Bones.

Upon checking out of Los Pinos the next day, one of the guests turned to myself and handed me a bill.  Not a bill of sale, but a bill.  Amber put 50,000 Colombian pesos in my hand and asked me to “take care of Bones”.  Not only that, but that she would also send money each month to continue the care.  Folks, its not one for me to step up and suddenly start my first NGO or anything, but the look of Bones and the plea by Amber were two things you couldn’t say NO to.

Suddenly the dilapidated Bones was in my hands at his new home Los Pinos Hostal.  We did our best to feed him, take out his tics, and he did his best getting to know the other resident dogs Luna and Brando.  We fed him and he got stronger and more confident.  In a matter of a few weeks his tail would sail high above his body, he would run and prance and even bark (although this would take the wind out of him).  We witnessed, in front of our very eyes, the re-socialization of a well worn out canine.  Bones came to life.  I could go on and on about it, but for the sake of brevity the long and short of it is:  Amber saved Bones, we did the work and the dog responded.  Almost a love story if there was one.

By the end of three weeks I had made my way down to the city and purchased some eye drops for an infection as well as the best flea and tick collar money could buy.  I got him used to both very quickly, and the photo below shows a very proud Bonsey.  Complete with his new collar he’s more than happy to show off.  21 days folks. 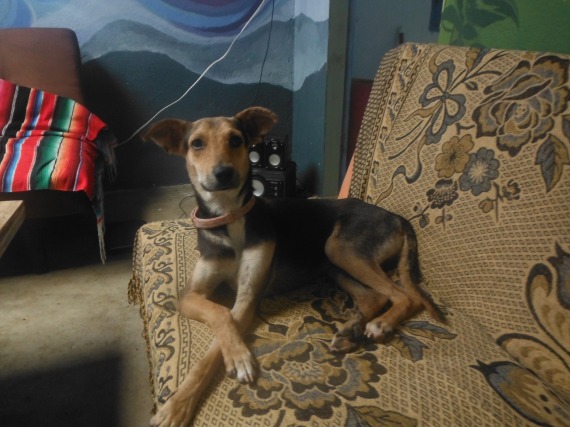 This entry was posted on May 23, 2013 by andrewmorden. It was filed under Travel Incidents Replayed and was tagged with Bogota, bull fighting, bullring, Chiguiro, Colombia, Fernando Botero, museums, rescued dogs, Tejo, travel.