Well now that the CFL season is well underway and things are moving along towards the labour day classics and fall weather football, its about time to introduce the Argos Admirals.

Consisting of a group of around a dozen Toronto Argonaut fans, we have been brought on board to contribute content – about the team and the league – to the various social media outlets available today.  Having been hired in early June, this group of enthusiasts have been writing and uploading and tweeting and talking and yelling (while at the games), in all forms and fashion about the Toronto Argonauts.  Being a big supporter of the club myself, it was natural to get involved and I was one of the lucky hires of this group.

We will be working all the way towards and through the 100th edition of the Grey Cup to be played in Toronto this coming November.

Having been a fan for my entire life it is certainly welcoming to get involved with the club in this fashion.  We work out of the head offices on King st in Toronto in a room called M31, and on game days we are in the press box and in the stands at the dome.  Anything going on in Argoland or regarding the Grey Cup will come right through our channels via the club.

argosadmirals.com Great articles with player interviews, summaries, predictions, and stories from the past.

$9 BEERS, you kidding me? Argos unveil their new jerseys at a classy event, but not $9 beers.

One of the best reasons for following the CFL and the Argos is the public access to players and coaches in a very informal way.  Access not granted in any other sport.  It is the essence of this wonderful football league, who this year is celebrating the 100th Grey Cup in Toronto at the end of November.

Lights, stages, displays, food areas, casino,  interactive exhibits and a bit of a hob knob in the whos who of the Argos, lit up the convention hall for a couple hours – we were there –  and we certainly did enjoy it.

The biggest disappointment was the convention centers pricing of suds.  A domestic bottle of brew selling at $9.  NINE BUCKS?  Are you kidding me?  For serious football followers, keep in mind, many of the events during the Grey Cup week will be take place at this same location and I certainly hope they get their pricing a little more pocket book friendly or people will certainly shy away.  For our group it is pretty much unheard of that we wouldn’t purchase a frosty beverage during any football event, game or otherwise..……..in fact, this evening will go down as the first time ever that we went dry.  It certainly says something about the tolerance level for high priced beers having gone over the top.  A $10 tall boy at the dome is bearable.  A severely over priced bottle of beer in the convention center, no way!  Enough of that rant……..a pit stop afterwards at Joe Badalis restaurant/bar  across the street for $7 pints of decent ale was the remedy.

Back to the eve

nt.  For those in the CFL/Argos football know, here are some of the people who were in attendance: Ricky Ray, Damon Allen, Jason Maas, GM Jim Barker, Pres Chris Judge, Prefontaine, Chad Owens, Drurie, Jordan Younger, Jeff Keeping……at least a dozen other players…………and of course, Mike Pinball Clemons staying till the bitter end as to make sure he greets and meets anyone and everyone who waits in line for a few minutes of his time.  Remarkable guy.

As for the jerseys, they were ok…..nothing spectacular or “wow”, but not terrible either.  Of course, the jerseys were the focus…….creating a buzz around the team the goal.  Certainly for those in attendance the event provided this.

Good to see many of my “football friends”……the ones you say goodbye to at the last game every  year and say hi to at the first.  It will be fun to be in the city this summer, if only for the Argos games alone. 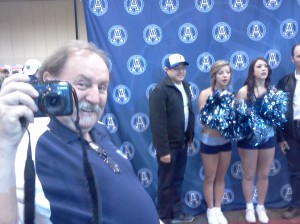