The Big Slice of Life

The Big Slice of Life.

Years ago life was simpler.  We’ve all heard that  – probably say that –  and shit, even thinking that ages one immediately in front of company even a few years younger than yourself.  It is true though – in some sense –  there were less rules,  more personal responsibility,  and in that, more leeway in what we could do and get away with.  Kids could still go to playgrounds or adventures in the woods without a parents supervision……dressing up as a devil on Halloween was considered an appropriate costume, and there was no such thing as a peanut free zone.  Today of course, none of these three examples are appropriate or allowed. It is too bad really.

My early youth was accelerated by an amount of independence given to me by my parents, with trust of course (although I didn’t always follow that, kids will be kids), and appropriately for the times, I lived a great childhood exploring, doing, living and learning.  Growing up, I was a big sports fan and I was allowed to attend Toronto Maple Leaf games at the Gardens – me and my buddy on our own – as early as age eleven.  Living outside of the city a random “Leaf game school night” would look something like this.  Mom drops us off at the GoTrain station in Oakville. We ride into Toronto to Union, and transfer to the subway.  From the subway, walk to the Gardens and watch the game from up in the grey section (and get this, tickets were $8 at the time), and do this in reverse following the contest.  Alternatively, my friends mom would pick us up around 11pm in Oakville and drop me off at home for bed and an early rise the following day for grade six.  Grade SIX!  Yes folks, during those days, you could leave  a somewhat responsible child on their own to do their own thing, and not have your neighbours call family and children services for neglect. Having this new found freedom,  my friend and I would snatch up every available Leaf ticket and exercise our independent option from those early days well into our teens.  I remember heading to the ticketmaster  outlet at Sunrise records on opening day for ticket sales and laying down $300 for upwards of 20 games we would attend.  And this would be at age 12. On a side note. When the boys in blue played their last game in the storied building back in 1999 I remember people saying they had never been to the gardens to watch a game.  Or maybe once for a game, once for a concert and once for a wrestling event featuring Hogan vs Andre the Giant or something along those lines.  At the time I went through my meticulously kept ticket stubs  – in a photo album – and counted the games I had attended during those years.  A proud me had walked through the hallowed halls of my/this  hockey shrine, at least 122 times.  Thank you mom and dad and the late 80’s.

To continue, one of the places we would frequent in the city was a pizza joint called THE BIG SLICE.  Located on Yonge St just south of College this appropriately named pizza parlour was just what a young and hungry kid needed.  In no particular order: Pizza, Cheap, Big.   My friend and I would go there night in night out for our fill right before puck drop and I would always order the peperoni and mushroom – cost with a coke at the time $3.50.  Standing at the counter in awe of the massive slices of pie, the smells, the excitement of the city and game night, was magic to us.  This was growing up at its finest…..free to do as we wished and away from moms and dads who (as with most other kids our age) were telling their children to do their homework and go to bed.  How cool were we? 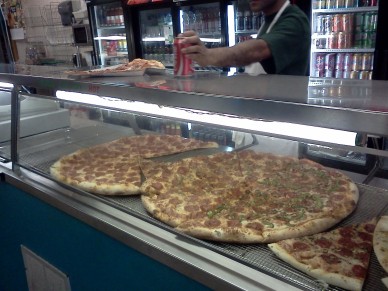 Fast forward 25 yrs later and I’m still eating THE BIG SLICE.  It has become a Toronto staple for me.  When Im in town and I need a quick bite to eat, nothing tempts me more than going for a quick slice of premium pizza (note:  this is not gourmet pizza or gluten free pizza or organic pizza or any other lovey dovey term of the day), simply pizza. And it is good.  It was good then and it has been good ever since, including yesterday.  The pizza is still spun by hand in the front window, toppings generously added by feel – not by scale and weight.   The counters, tables, chairs, and paintings on the walls – all remain the same. Dance music of the day played over the decrepit radio shack speakers – wires still unattached to the walls – a five minute job that could have been done decades ago.  Until recently Ive not taken notice of how long Ive been eating at The Big Slice and how long things there have just remained the way they were.  Continually I still order peperoni/mushroom and a can of coke.  The cost today is five bucks tax incl. Pizza, Big, Cheap.  I was thinking to myself that maybe it’s the nostalgia, maybe the feeling of returning to a different time – young, innocent, free – or maybe Im just stuck in my ways, and this the reason I keep going back.  I mean Im not with my buddy like the good old days  – who has long since moved to Asia  – nor going to a hockey game……..nor there avoiding bed time and homework. But I am there for some reason besides just being hungry.

I can only think to myself that I love the place because it hasn’t changed. Its grown up a bit – like we all have.  Funny though……on the other hand it means that (in this case) I haven’t grown up either.  To take note of yourself in a slice of pizza……it’s a bit crazy, but I think its contemplative and  cool. Life is good sometimes.

Final Note: take away all the philosophical stuff and life lessons Im trying to pull together, and the pizza there is that good.  You really should check it out. Open daily…….pretty early to very very late. East side of Yonge at the corner of Gerrard.

……and my buddy, that’s Graham.  Some of you would know him.  Hes lived in Thailand for the last decade with a lovely wife and two beautiful children…..he has everything he needs  but access to The Big Slice.

This entry was posted on May 7, 2012 by andrewmorden. It was filed under Deli Reviews and Diner Experiences, Toronto, what is going on in Toronto? and was tagged with Coca Cola, go transit, Pizza, the Big Slice, the Gardens, Toronto, Toronto Maple Leafs, Yonge St.