My fish is bigger than your fish. The Biggest Lion Fish ever caught. 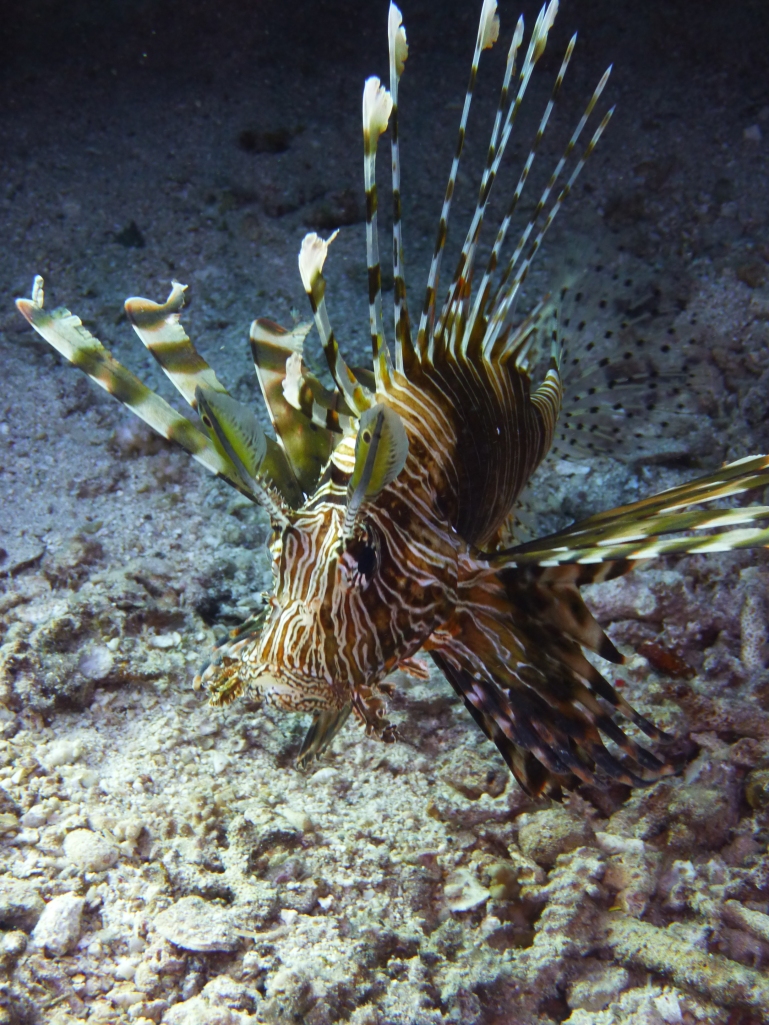 Having first been recorded on the reefs around the island of Utila (Bay Islands, Honduras) in May 2009, this species of fish multiplied, divided, and almost conquered.  For those of you who are not aware of this particular fish…..they are a gorgeous one for sure…….BUT, they are not native to the waters of the Caribbean (but of the pacific, amongst others), and they are tearing apart every fish species they can get their mouths on.  Being able to expand their stomach thirty times original size, to be able to go weeks without food, to multiply like rabbits, and their penchant for dancing and mesmerizing the young juveniles into a trans – then to be eaten quickly and feverously .  With no natural predators in the Caribbean, the Lion Fish are desecrating many fish species from Florida and Mexico – in the north –  all the way Panama in the south.  Simply put,  the fish has no natural predators in these waters AND no external method of population control – as such, you will soon have a reef population consisting solely of Lion Fish, at the top of the food chain……and then you will start loosing the actual reef as well.

A few years ago – on Utila – some very concerned people began voicing the problems this situation was flourishing into.  Different studies were done and different methods of controlling (see: making the Lionfish extinct) were experimented with.  All though rules are irregularly enforced (ie. Never) in Honduras, using a spear gun/sling to kill the Lion Fish (or any fish for that matter) was illegal at the time.  A good friend of mine helped to lobby the government (ie. anyone who drives a nicer car and might listen) for an exclusion in the law to allow spearfishing on the islands in the effort of reducing the Lion Fish population.  With extreme effort and then approval, there were training sessions and signs up and educational pamphlets and even practice spearing on innocent potatos, for those trained and interested.   Spears were assigned to each dive shop (at their cost) and dive professionals were allowed to take along the spear/sling on their dives in an attempt to control the expanding pest population.  Off to a slow start for the first year or so, the program gained momentum and grew to a point where every dive shop is currently participating during all of their recreational dives – each and every day –  in the sea and reefs surrounding Utila.  To our knowledge it was (and might still be) the only community business initiative embraced and practiced by all – for the betterment of the reef, the divers, the local population, and overall sustainability of the fish populations which almost everyone relies on in some way or another, to make a living – on Utila and many other places in the Caribbean. 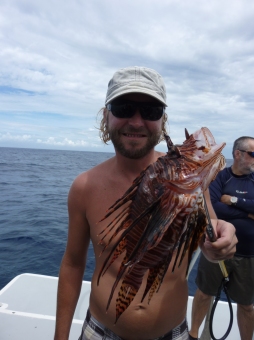 And I almost forgot.  The Lion Fish are actually venomous.  That is, the fins (or more like spikes) can give you one helluva painful situation, if you do get stung by one.  Swelling, numbness, and burning, with the outside chance of death thrown in.  In only a few people, the reaction to a sting is simple (Burgundy has handled it well from what Ive witnessed).  Mostly the reaction, is of the “ That was the worst pain ever” category.  Simply put, you don’t want to get stung.

And as a secondary for those in the gambling business…..something like 16 of 24 of the spines are venomous….8 of them are fine, will not hurt you.  Have a look at the photos  and tell me if you can figure out which is which.  The Lion Fish wont attack you specifically but they will react to you trying to stab them with a three pronged spear, and dart one way or another in fight or flight reaction. You will get anywhere from no chances to three chances at a fish.  If you do strike, you then have a very alive but trapped bad ass lion fish two feet away from your hand till you can finish it off, quickly hopefully.  They live as shallow as a couple feet beneath the surface all the way to as deep as you want to dive……….ok then, enough is enough on the background of the lion fish……on with the rest.

Anyway, I caught a mammoth lion fish one day on the north shore.  After a bit of a struggle and with help from a fellow grouper sourcing out the hiding fish…….it was finally hooked…and a good one at that.  It remains the only time – of the 400 or so lion fish Ive ever killed – in which I brought the fish directly back to the boat.  I was happy……the grouper, not so much, trailing most the way back looking for the usual feed.…..to no avail, I surfaced,  yelled at Captain Kerry, and handed the spear and kill carefully up to him. 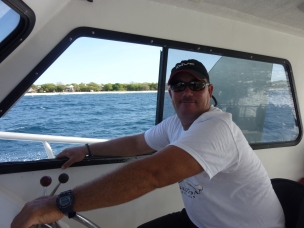 What?, look at this oneeeeee….” Says Kerry

“Ya look at that man” exploding with elation I say. “Its huge!”

“It tis it tis, get It up here in the buhket.”……do as the Captain says.

We returned to the resort and within an hour the fish was measured.  It certainly was a good sized one but nothing anyone wouldn’t expect.  Nose to base of tail, measured 31.5 cms.

I called Anjei on the rock from the boat on the good old Claro phone, my neighbour, the man in the know about this stuff…..………he confirmed, biggest ever caught…….. Biggest Ever.  Nice one I thought, and of course Im happy to contribute to the cause and my ego appreciates the accolades of that accomplishment, even if Im the only one who brings it up.

The third Utila Lion Fish derby was completed a few weeks ago with upwards of 20 teams (of 4 participants) competing for the chance to capture and kill the invasive and detrimental Lion Fish.

They offer prizes for the most fish caught, the smallest fish caught and the largest fish caught.  In the end they all get eaten in a wonderful feast for the senses complete with reggaeton in the background and bragging  rights on the line.

Im so happy that this tournament has continued to be done. It is a part of Utila, it has to be….thank you to everyone who helps in this cause, day in day out, its just that important.…….and not just during the tournaments.  For each tournament lion fish kills are quite large, numbering 400-500 per occasion. They are tallied, weighed, measured and eventually filleted.  A large feast – free for all so to speak  – occurs shortly after the last afternoon. Lion Fish specialities for everyone.  Everything (time included) donated humbly by the caring and enthusiastic expats, tourists, dive shops and even locals.   Of course, BICA headlining the efforts and organization.  Again, thank you. From me, from the reef, from future generations of divers alike.

But back to my final point,

My Lion Fish record survived the first two tournaments and over 1000 fish caught…..I was not on the island for the most recent 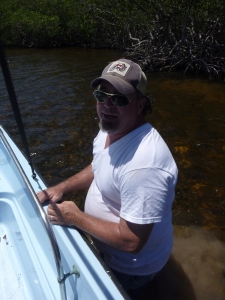 derby, so I emailed Dave (of one of the organizers) to enquire about the sizes of the fish caught in the most recent derby………..fingers crossed, my record would remain intact.  Dave is usually a smart ass, and being my lion fish killer understudy, he would like nothing better to crush my ego with news of a fallen record.  Verbatim, here is text of my message and response from Dave Burgundy:

“ How did it go otherwise?”

“Youre safe, the biggest was 31 cm, and it was an even bigger success than last time..onwards and upwards. 90% of the fish brought in were over 20 cm.”

I guess that is enough said, ego intact.……I look forward to the next Utila Lion Fish derby.  Here’s to protecting a place we love! Great work everyone.

Ps. I know Ryan, you dont endorse the name Burgundy.  None the less, you inspire me.

………………..And a couple more photos if youre really interested. 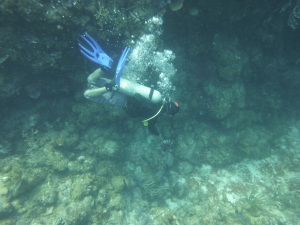 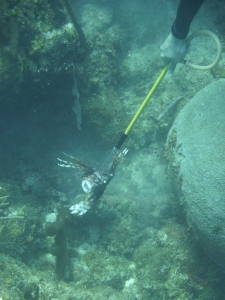 A solid strike with the sling….time to find something to feed it to. Educate the predators. 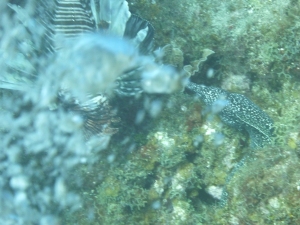 A spotted eel taking a good look at possible dinner time. It eventually did hit it.