After a lovely Sunday afternoon hanging out with friends and family in Lesliville, some afternoon suds, and great conversation – early evening hunger set upon us.  Combined with the “end of the weekend” blues and laziness we decided to check out a diner just down the road which apparently serves one hell of a burger.  The joint is called Dangerous Dans Diner.

Ill try and keep this short in the spirit of not posting every detail about everything I eat in the city…..but this place deserves a few points to mention. 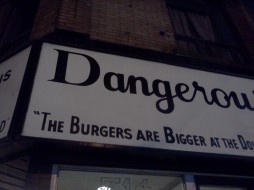 First, it is a basic diner, set on the corner with views of the street through the large glass windows, and lit up by traditional fluorescent lighting.  The menu was quite extensive but certainly focused on various burgers ranging from the traditional ½ pound cheeseburger all the way through the “Colossal Colon Clogger Combo” at $25.

Note: the “CCCC” is a 24oz burger (1 ½ lbs) topped with 2 eggs, ¼ lb of bacon, ¼ lb of cheese, served with a small poutine and a large shake.  I asked the manager how many people actually eat the CCCC and he replied that they probably sell 25-30 a week.  WOW, glutten.

Immediately upon entering the diner you could smell the grill, hear the music and chattering, see 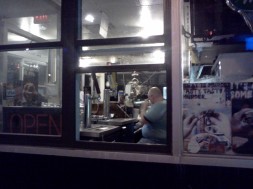 that the seating was slightly different than we are used to……and notice a touch of attitude from the manager, cashier, cook, and dishwasher.  For those of you not familiar with traditional diners and “how they should be”………..a certain amount of attitude, cockiness, no care if youre there shtick, is appropriate and expected.  They treat you as if youre the one lucky to be there….that WE need them (to eat) more than THEY need us (the customer to pay the bills).  This however is no reflection of the food or speed or efficiency of service, simply how the staff interact with the guests.  After finishing your meal it wouldn’t be out of place for the waiter to say something to you like, “hey you done?”…………ah ya…………”well if so why don’t you free up these seats and get the hell out of here.” .  This might sound offensive to some but it is the essence of a proper old school diner, and just one small example of this attitude. 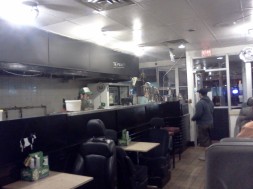 None the less.  Dangerous Dans Diner is this type of place, and interestingly enough the seating in the restaurant is comprised of seats from cars and vans.  Neat concept.  Not sure if it adds to anything or takes away….but it is what it is, and when you go there you sit in a retro fitted car seat around the tables of four.  We all ordered the traditional cheeseburger and decided to split a large order of poutine to see if in fact it was good old traditional poutine or simply fries, gravy, and shredded cheese.

Everything was served quickly and in the astonishingly large portions we were expecting –  becoming even  more impressive when the plates are right in front of you.

Burgers were awesome all around.  I though the bun could have used a bit more work but all in all, what a good burge

r!  Poutine was decent as well.  Good Ontario cheese curds but certainly not those rubber squeaky curds you get in La Belle Province. Well, we tried.

We finished our meal and on our way out of the diner, I had this exchange with the cook.

Cook: Walking by, looking away, in a snarky voice says “Ya……. you don’t think we know that?”

It is never interesting to watch people eat, but here is a quick video of us at the table with food in front of us.  The really cool thing about the recording  is:  THE MUSIC PLAYING IN THE BACKGROUND.  To hear a sample of that alone, is worth clicking on the video if only for a few seconds.  Hilarious.